The most complete, flexible and versatile calculator for professionals in the oil and gas industry! Now optimized for iOS 12 and above. Newly added features: - Calculator for Aromatics - Added the following tables to the oil conversion screen: table 4, 8, 9, 10, 11, 12, 13, 14, 52, 56, 57, 58 - Added a field for density correction in the main calculator (and quantity editor) for the calculation of special applications in case a thermal expansion coefficient is not available - Viscosity / pour point / flash point blender - LNG density calculator - Viscosity / Temperature calculator - Density data for both the LPG and LNG density calculator are stored in the phone for easy retrieval The app uses the ASTM tables / formulas to calculate weights and volumes based on entered density15, density20, relative density or API, observed volume, pressure and temperature, and calculates the following: - Volume correction factor (to number of decimals of your own choice or as set by table Version) - Metric tons (vacuum) - Metric tons (air) - GSV (M3 @15) - BBLS (@60) - Longtons - Gallons OilCalcs contains both ASTM 1980 and ASTM 2004 tables (including updates 2007 and 2009) as well as the ASTM 1952 version of LPG Table 54, and users can select which table to use in the settings screen. Users can also select whether they want to calculate using SI Metric units or Imperial units. Precision for VCF, GSV, MTons, LTons and Bbls can be changed using the settings screen. Settings are saved in the app so that when you use the app next time it will calculate with your chosen settings. Densities can be entered in the following formats which are automatically recognized: e.g 0.9664 / 966.4 / 9664 The app can calculate for crude oil, black and white products, lubrication oils and special applications, and input can be changed between density in vacuum at 15 and 20 deg C/ API / relative density / observed, and degrees Celsius / Fahrenheit by touching the applicable buttons. The user has the choice to calculate using as input observed M3 / M3 at 15 / observed Barrels / Barrels 60 / Metric tons air/vac / Ltons / Gallons. The user can also calculate weights of LPG / NGL, using either density @ 15C, relative density @60F, observed density or density @ 20C. Aside from the conversion screen with conversions between API, observed density, density 15, density 20 and relative density, there is also a screen with conversions used in LPG / NGL. For products, lube oils and crude there are two tools for calculating final density when blending two components: one tool that calculates the blend after loading the 2nd component, and another tool that lets the user choose the two components and advises which component to load first, based on density 15C or API 60F and actual temperature of the components. Both tools also calculate volume shrinkage due to blending. A utility has been included that enables the user to export data from the calculator screen directly into a database for future reference. The same utility can be used to enter data manually and edit previously entered data. For a detailed tutorial please visit our webpage (http://mooringmarineconsultancy.wordpress.com). 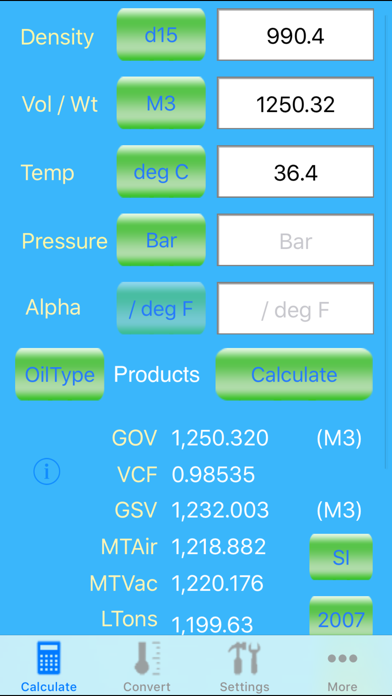 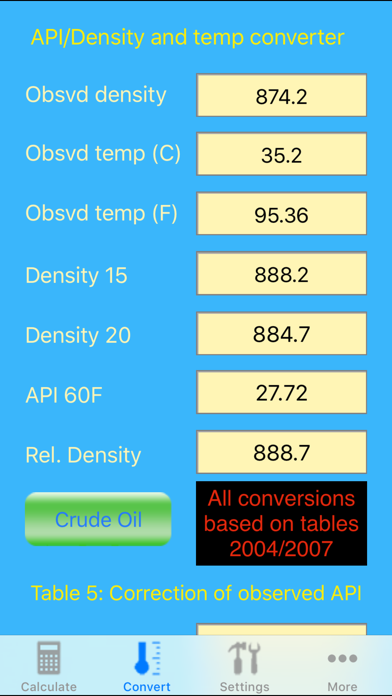 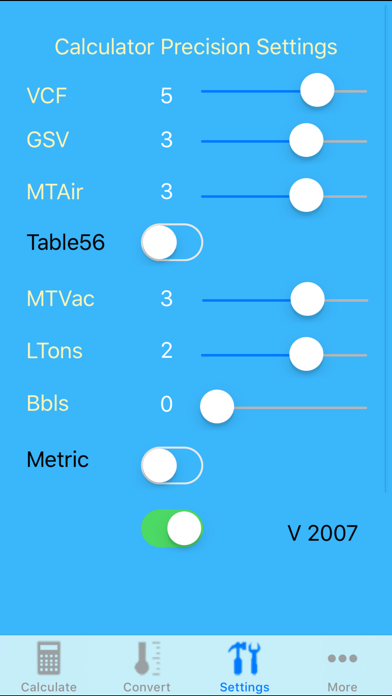 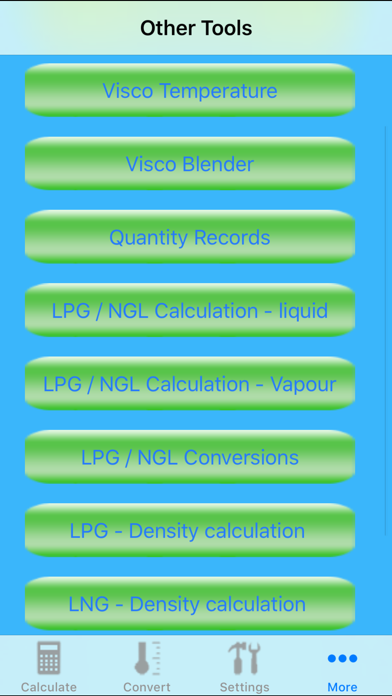 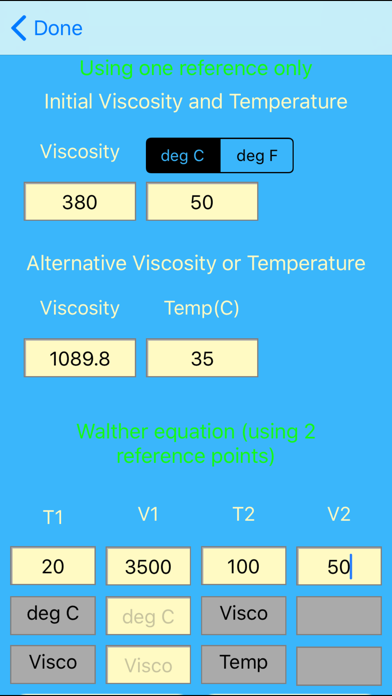 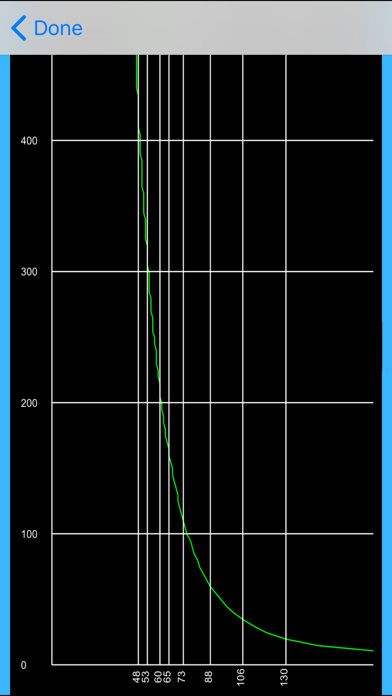 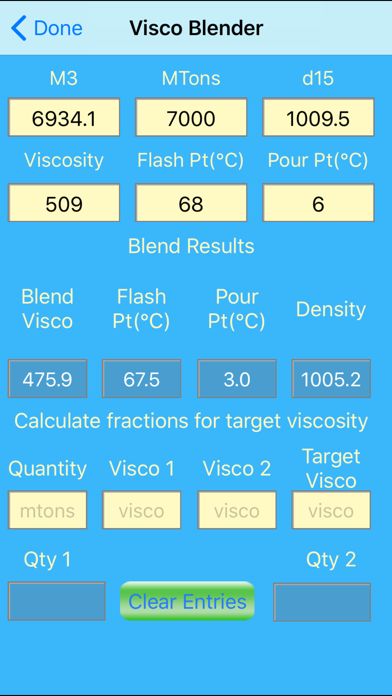 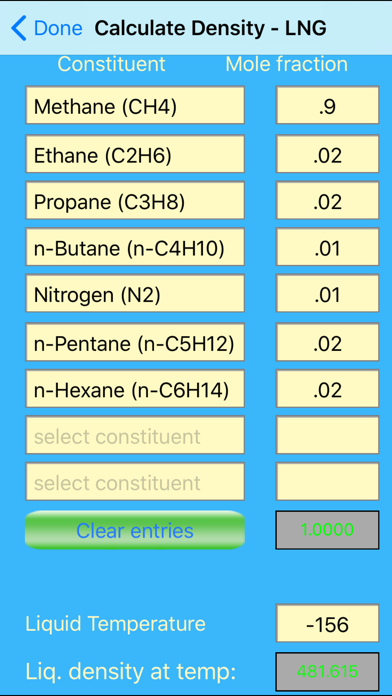 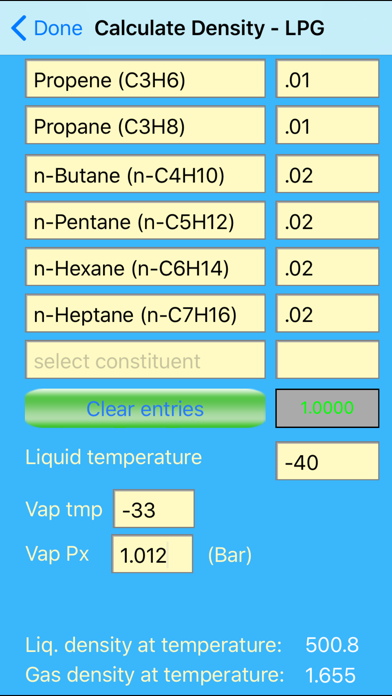